It’s not long now to the 2018 World Cup in Russia starting on June 14 and if you’ve booked your tickets to see the Socceroos in action (or you’re about to) NOW is the time to think about getting the recommended vaccinations and advice. Most vaccines can be given at one time but a few may need to be spaced out over a month, so make an appointment for your pre-travel medical very soon.

Nearly 5 million fans have put their names in the first draw for tickets, just over half of them from Russia. Among the international fans, going by the top 10 countries for ticket requests, you can expect to see plenty of people from Germany, Argentina, Mexico, Brazil, Poland, Spain, Peru, Colombia, USA and the Netherlands1.

When travelling to sporting, cultural or political events or religious festivals, anywhere there are large gatherings of people from all over the world you should be aware that they carry their own set of health risks. The World Health Organization2 (WHO) has been active in supporting host cities and countries in their preparations for these packed events, including the Olympic Games in London and Sochi, UEFA championships and even the Eurovision Song Contest!

With respect to the potential for health consequences, the WHO explains that mass gathering events ‘can be settings for disease outbreaks and other health problems … All this can stress the public health system and resources of host countries and the countries where the visitors return to’.

In the planning stages, assistance is rendered to host countries by the WHO in areas such as:

- ‘travel medicine: procedures to provide updated health advice and vaccination guidance for visitors on vaccinations, food and water safety, and other information, including emergency contact numbers; and

- promotion of healthy behaviours: activities before and during mass gatherings to encourage, for example, increased physical activity, observing local laws and customs, avoiding aggressive and inappropriate behaviour, cessation of tobacco use, avoidance of excess alcohol and using safe sex practices2.’

First, here’s an overview of the vaccinations we would typically discuss for leisure travel to Russia, which fall under 2 headings.
ROUTINE vaccinations such as measles-mumps-rubella (MMR), diphtheria, pertussis, tetanus, chickenpox, meningococcal disease, and seasonal influenza should be up to date for every overseas trip. (Outbreaks of measles have been common in developed and developing countries recently, while flu is the number one vaccine-preventable risk for overseas travellers. Both are a concern when lots of people come together from all points of the globe!)

RECOMMENDED vaccinations for Russia would include hepatitis A, which can be given on its own or in combination with hepatitis B. Hotel workers in Moscow have been required to get hepatitis A vaccinations in preparation for the arrival of the Cup players and fans - their vaccination checks also include diphtheria, tetanus, hepatitis B, measles and rubella3. Unlike Hep A, which is spread by eating or drinking contaminated food or water, Hep B is passed from person to person through the transfer of infected blood or bodily fluids. Vaccination is usually suggested for young singles, travellers on longer stays, those heading ‘off the beaten track’, or those who plan to travel regularly in the future (regardless of age). Typhoid fever, a bacterial disease spread through contaminated food or water, is present in Russia. The disease is usually not considered a significant risk for people on short visits staying in quality accommodation, but vaccination may be suggested if you’ll be staying on to see more of Russia after the Cup or you plan to visit other countries in the region. (Rabies is also present in Russia, but vaccination is more likely to be recommended for longer stays, especially in rural areas.4)

Traveller’s diarrhoea rates are considered moderate by international standards so following safe food and water guidelines is recommended. (A locally produced vaccine is available for the prevention of dysentery outbreaks caused by Shigella sonnei bacteria in the Russian population, but it would not be used for international Cup fans5.) Food and water precautions would also be advisable in the prevention of parasitic intestinal infections such as has occurred from time to time in Russia among people who have consumed undercooked pork or meat from other animals (bear, badger, walrus)6. Check with your travel health practitioner if a diarrhoea treatment kit would be useful for your trip – they’ll advise you on the medications you’d need.

Repellent, long sleeves, long trousers and some enclosed footwear are important items to pack if you plan to hit the rural or forested areas of the country - this is to avoid tick bites. The Ixodes species of tick is the vector of the viral illness, tick-borne encephalitis (TBE). This infection, which strikes the central nervous system of humans, is endemic in many European countries and causes anywhere from 5,000 to 13,000 cases each year. Russia reports more cases than any other6. (A word of warning: you can also contract TBE from consuming unpasteurised dairy products.)

The risk of tick bites occurs below 750 metres in altitude generally, but the range is increasing upwards, and the warmer months of April through to November are peak TBE transmission months – more so in the summer when ticks are most active.

A TBE vaccine is available through the Special Access Scheme, however it is generally used for travellers who will have extensive outdoor activities (camping, berry picking, hiking) in affected areas. Ask your medical practitioner for more information.

If you don’t plan on heading out of the cities and you don’t consume unpasteurised dairy products, your risk of TBE is very low indeed; however if you needed more reasons to avoid tick bites, they are also responsible for a number of other infections in Russia – Crimean Congo haemorrhagic fever, tularemia and Lyme disease8.

Guard your personal safety, too

A major sporting event held in a large stadium with often volatile fans has the potential for emotional and physical stress, as well as aggression. So it’s important to pay attention to your own security, drink plenty of water to prevent dehydration, avoid no-go areas, and don’t drink alcohol to excess.

When it comes to STIs, play defensively and BYO (condoms).

All of this is good advice for sports fans – even more critical when you’re more than 14,500kms from home.
And, our final two pre-game tips: Don’t forget travel health insurance and register your travel with Smartraveller!

For more information, call our phone information service on 1300 360 164Monday to Friday 9am to 6pm AEDT. 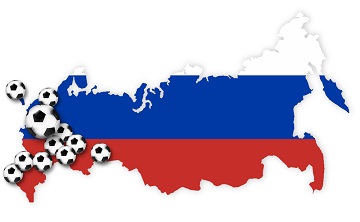