Routine, for a reason

Routine vaccinations are the ones that you have during childhood – like tetanus, diphtheria, polio, measles, mumps, rubella (MMR) & meningococcal disease; but also when you’re an adult, as needed for job applications (e.g. hepatitis B), when pregnant/planning parenthood (e.g. whooping cough, influenza & MMR), following an injury (tetanus) or on reaching mature age (e.g. influenza, pneumococcus & shingles).

Right on cue, just when we were considering posting an article on routine vaccinations for travellers, news on several outbreaks at home and overseas have cropped up to prove our important point! This is significant, because a recent study by Robert Menzies et al (2017)  has found that there are around 4.1 million under-vaccinated Australians each year, the majority of those are adults. According to co-author Prof Raina McIntyre: “Adults contribute substantially to ongoing epidemics of vaccine-preventable diseases. Most cases of whooping cough, for example, occur in adults. About half of all cases of measles that occur in Australia are in those aged 19 years or over”.

Over the past few weeks, our local press has reported on measles infections brought back to Australia following trips to Bali (measles is no longer endemic here). They include cases in Victoria, Western Australia, NSW, QLD  and the Northern Territory. Also this year, other countries where Australians became infected with measles were Malaysia,  Thailand and India.
Measles is a highly infectious disease, so there is a very high risk of a single case spreading the disease to unvaccinated others either during the return journey home or once home.

And even among developed countries, the burden is not ours alone. The European Centre for Disease Control issued an update for March 19-25, 2017, in which it was noted that: ‘In the EU/EEA Member States, measles cases have been reported in Austria, Belgium, Bulgaria, Denmark, France, Germany, Hungary, Italy, Spain and Sweden as well as in Romania where 3,799 cases have been reported as of 17 March 2017. Outside of the EU, outbreaks have been detected in Australia, Canada, Democratic Republic of Congo, Guinea, Mali, Republic of South Sudan, Syria and South Africa.  Of course measles is just one of the so-called childhood (infectious) diseases.

Some other routine vaccines

Tetanus is present world-wide, but thankfully infections are rare in Australia. In 2016, there were only 7 cases here (4 of those in adults aged over 40). Often the reason that middle-aged or elderly contract and fall seriously ill from tetanus is the waning immunity from vaccines they had too long ago. If you are travelling, tetanus boosters are usually given every 10 years but may be recommended after 5 if, due to planned activities (such as with hiking, bike riding or mountain climbing), there is a risk of injury causing a soil-contaminated, tetanus-prone wound. Just last month a 7 year- old girl in Lismore, NSW, contracted tetanus after her parents declined tetanus booster vaccinations as part of treatment for her tetanus-prone wound.

Diphtheria, as with tetanus, no longer causes the countless cases and deaths in Australia that it did prior to the introduction of the vaccine in the early 20th century. Last year we recorded 8 cases – all in adults over 20 years of age – and across the globe there were over 4,500 cases in 2015. The diphtheria antigen is included in the tetanus booster.

Mumps, or epidemic parotitis, continues to cause outbreaks in both developed and developing countries. In the last few years it has been young adults, even up to their 30s, who are more likely to become infected: in 2016, Australia recorded 523 mumps infections in people aged between 10 and 34 years. The national total for the year was 804 cases, with over half of those from Western Australia. North America has seen a surge in cases over the past few months. Two doses of the measles-mumps-rubella (MMR) vaccine are given at least 4 weeks apart.

Chickenpox (or varicella) vaccine is one of the routine immunisations now given to infants, with a catch-up program for younger teenagers. Varicella infection causes brain inflammation in one on 100,000 cases and is particularly serious in pregnancy due to the high risk of congenital malformations in the baby. Having the vaccine is also significant as someone who has had a prior infection with chickenpox can suffer from shingles at a later time - the virus can lie dormant for a period of time and then reactivate. Chickenpox occurs in both developed and developing countries. Last year (2016) there were almost 2,500 cases in Australia – 23 percent of those in adults over 20 years of age.

Influenza is included in the ‘routine’ category as the vaccine is updated each year to cover what are expected to be the dominant circulating flu strains. When it comes to travel, influenza is the most common vaccine-related infection and the peak season covers the globe at all times of the year: Southern Hemisphere winter, Northern Hemisphere winter and year-round in the tropics. In Australia, flu-related illnesses kill over 3,000 people each year and many more end up in hospital. Government funded vaccines are available at the start of each flu season for at-risk groups, such as people aged 65 years and over, Aboriginal and Torres Strait people aged six months to less than five years and those aged 15 years and over, pregnant women and anyone over 6 months of age with medical conditions such as severe asthma, lung or heart disease, low immunity or diabetes that can lead to complications from influenza.

Communicable diseases can strike and then spread quickly at home and abroad; their appearances rarely make it onto our nightly news and so aren’t usually common knowledge. In many developing countries, and even developed countries, where Australians love to holiday, vaccination coverage for these common childhood diseases is much lower than ours, leaving a larger pool of people who can infect others. So for the 4 million+ Australian adults who are known to be under-vaccinated (& under-prepared) for the medical problems that can attack them here, overseas travel has the potential to offer many more risks. 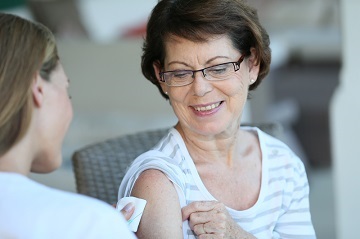