Leishmaniasis: Travelling on the wings of war

An insect-borne disease that can cause permanent scarring is nearing epidemic levels in parts of the Middle East and East Africa, posing a risk to Australian travellers visiting the regions.
Until recent years cutaneous leishmaniasis was largely contained to areas around Aleppo and Damascus in Syria. However, Syria’s war has done three things: Created ideal conditions for the insects to breed, prevented infected people from being treated, and caused the mass migration of millions of refugees into previously non-infected neighbouring countries, especially Turkey, Lebanon, and Jordan.
Described by doctors as ‘catastrophic’, the outbreak of the ‘Old World’ disease is now affecting hundreds of thousands of people living in refugee camps or trapped in conflict zones.
An epidemic is also occurring in Eastern Libya and Yemen, scientists say in a new report. Yemen reports around 10,000 new cases each year and with Yeminis migrating to Saudi Arabia, it’s highly likely leishmaniasis will also surface there.
The conflict and mass displacement in Syria has also created the risk of tuberculosis, measles and polio, along with cholera and brucellosis, highlighting the importance of travellers to the Middle East receiving routine ‘childhood’ immunisations, if required, along with other vaccines that may be recommended for their individual itinerary.

More about leishmaniasis… Leishmaniasis is a parasitic disease found in parts of the tropics, subtropics, and southern Europe. There are two main forms – cutaneous and visceral – both transmitted by bites from infected sand flies. The former causes disfiguring skin ulcers, while the latter results in severe systemic disease that is usually fatal without treatment. India, Bangladesh, Nepal, Sudan, South Sudan, Ethiopia and Brazil account for 90% of visceral leishmaniasis, while 90% of cutaneous leishmaniasis cases occur in Afghanistan, Algeria, Iran, Saudi Arabia, and Syria, as well as the South American countries of Brazil, Colombia, Peru, Bolivia and Argentina. Read more on the disease and prevention.

How leishmaniasis is treated… Therapy varies, depending on the clinical form of leishmaniasis, the infecting species and the region where infection is acquired. It usually consists of oral or parenteral medication, or a topical medication used on the effected area. Travellers concerned that they may have been infected through sand fly bites should call Travelvax on 1300 360 164, or see an infectious disease specialist or their GP.

How to prevent it… There are no vaccines or drugs to prevent leishmaniasis. Prevention relies on avoiding sand fly bites by:
- Where possible, staying indoors between dusk to dawn, when sand flies are most active.
- Wearing long sleeves and pants, shoes and socks when outdoors – especially after dark.
- Apply insect repellent containing DEET, Citriodiol or Picaridin to exposed areas, including under the edges of sleeves and pant legs.
- Sleeping in any air-conditioned or well-screened room, or...
- Sleeping under a bed net.
- Spraying with a knock-down insecticide may provide some protection. Fans inhibit the movement of sand flies, which are weak fliers.
Sand flies are so small (approximately 2–3 mm) that they can pass through the holes in ordinary bed nets. Although closely woven nets are available, they may be uncomfortable in hot climates. Buying a net treated with permethrin or another contact insecticide will enhance the effectiveness of your bed net.
DIY kits are available to treat bed nets and clothing.
Read more about leishmaniasis and how to prevent infection.

Like to know more?
If you have questions regarding upcoming travel to the Middle East, including routine, recommended or required vaccinations, please contact Travelvax Australia on 1300 360 164. We can provide no-cost, no-obligation country-specific advice and arrange for a pre-travel medical consultation at a Travelvax Clinic. 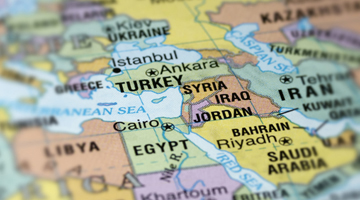