With final packing and preparations well underway for those lucky travellers heading to the Olympic Games, there are just 16 days until the official opening ceremony. Travelvax has compiled a medical checklist outlining a few specific concerns for travel to Brazil, as well as the predictable stomach upsets, sunburn and security.

Events of the 2016 Olympic and Paralympic Games, while primarily set in Rio de Janeiro during August and September, will also take place in Belo Horizonte, Brasilia, Manaus, Salvador and São Paulo. To these areas, more than 200 member nations will arrive bringing over 10,000 athletes; in excess of 1 million visitors are expected to view the spectacle. As could be expected, the risk of spreading communicable diseases is increased with such large numbers - crowding, shared accommodation, travellers from all continents, as well as the diverse and varying ecology of Brazil, will put travellers and host-country residents at risk.

Yellow fever is the only disease for which vaccination is required under the International Health Regulations - provided there is no medical contraindication. This is to ensure that there is no further spread of the yellow fever virus from existing endemic countries. Yellow fever, a mosquito-borne disease, is present in a number of South American countries, including Brazil, and vaccination may be required for travellers moving on to another destination.
While proof of yellow fever vaccination is no longer a requirement for entry into Brazil, the protection offered by the vaccine (as well as diligent use of insect repellents) is recommended for travellers heading to host cities such as Brasilia, Belo Horizonte and Manaus. All Australian travellers returning home from a yellow fever endemic country such as Brazil are required to show proof of vaccination: a yellow fever vaccination certificate is required from travellers over 1 year of age arriving from countries with risk of yellow fever transmission (except Galápagos Islands in Ecuador, the island of Tobago; limited to Misiones Province in Argentina) and for travellers having transited for more than 12 hours through an airport of a country with risk of yellow fever transmission. As outlined by the Department of Health however, those people who are unable to provide a certificate will still be able to enter Australia.

The focus of late has largely been on the risk of acquiring Zika - previously considered innocuous, the mosquito-borne virus is now known to pose a serious risk to pregnant female travellers. Yet there are other similarly transmitted disease hazards which travellers may be exposed to - dengue fever, chikungunya and malaria are three of the more common ones.
For any Aussie traveller visiting Brazil, taking steps to avoid insect bites must become second nature. These include:
– Applying an insect repellent containing an effective ingredient such as DEET (30-50% formulations for adults, or 10-20% formulations for young children and infants as young as 2 months of age), Picaridin, IR3535, or preparations containing extract of lemon eucalyptus oil when mosquitoes are about – especially at dawn and dusk when they are most active.
– Wearing long, loose-fitting, light-coloured clothing at peak feeding times.
– Sleeping under a treated bed net if staying in a tent or in budget accommodation without screened doors and windows, or air-conditioning. A permethrin treated net can be purchased or buy a DIY kit to treat both the net and clothing. Used in conjunction with a personal insect repellent, permethrin is a safe contact insecticide which creates an additional barrier that repels and ultimately kills biting bugs that land on bed nets or clothes.
Reducing the number of times you are bitten reduces the chances of an insect-borne illness bringing your trip of a lifetime to an abrupt end.

Amazon on the itinerary?

Many of the cities in Brazil where the Games will be held are malaria-free, however if venturing to the Amazon basin, including Manaus, that changes the need for further protection… Our advice is to discuss the use of malaria tablets with a healthcare professional.

Hepatitis A – strongly recommended for travel to South America (and other developing regions of the world).
Hepatitis B – consider vaccination, particularly if the stay is for more than a month or for frequent overseas travel. As Hep B is a blood- and body fluid-transmitted infection, those undertaking adventurous activities or at risk of sexually transmitted infections should be vaccinated.
Typhoid – recommended for ‘adventurous eaters’, especially if likely to head off the ‘beaten track’ or remain for an extended stay.
Rabies –Rabies infection results from a bite from an infected animal (usually a dog but can be any mammal). Once again the longer the stay, the higher the potential for infection, but many times tourists are bitten early in their stay. Vaccination should also be considered by travellers visiting remote areas where prompt appropriate medical care for exposures may not be available.
And…
Boosters for MMR (measles/mumps/rubella), DTPa (diphtheria/tetanus/whooping cough), chickenpox as needed, as well as pneumococcus if advised.
Influenza – While the Games are taking place after the June/July peak of the influenza season in Rio de Janeiro, seasonal variations do occur. Influenza is the most common vaccine preventable illness in travellers and vaccination should be sought at least 2 weeks prior to departure.

Traveller’s diarrhoea: Up to 60% of all leisure and business travellers are laid low by travellers’ diarrhoea (TD) – this means at least a day or more of inconvenience and discomfort. We recommend carrying treatment medication, plus sachets of rehydration solution – just in case – and avoid the obvious traps: ice made with tap water, undercooked or raw foods, salads washed in tap water, unpeeled fruits, and protein foods kept at room temperature. Read more about avoiding and treating TD.

Altitude sickness (AMS): If high-altitude destinations such as Cuzco /Machu Picchu, Lake Titicaca, and La Paz are on your South American itinerary, it’s important to plan your journey carefully to minimise rapid ascents. Around half of all travellers will feel unwell at 3500 metres above sea level and nearly everyone will have symptoms at 4300 metres and above. At 3400m above sea level, Cuzco is the gateway to Machu Picchu (which is actually considerably lower at 2400m). Travelvax recommends travellers transfer from the airport in Cuzco to towns such as Ollantaytambo in the lower-lying Valle Sagrado to aid acclimatisation. Exploring Machu Picchu before returning to Cuzco will result in far fewer travellers experiencing altitude illness. Diamox (acetazolamide) is the most effective medication for preventing altitude sickness, if tolerated. Read more about avoiding and treating AMS.

Sexually Transmitted Infections: Infections such as HIV-AIDS, gonorrhoea, herpes, and chlamydia can present a greater risk during travel; they may be more prevalent and the relative freedom and lack of inhibition travel offers can lead to a more casual attitude towards sex. Our advice? Practice safe sex. Read more on STIs.

Lastly, make sure you take out comprehensive travel insurance and register your travel with the Department of Foreign Affairs and Trade’s smartraveller.gov.au (download their app)

The Australian Department of Health and the US Centers for Disease Control and Prevention have provided further useful information for travel to the Olympic Games.

Planning a trip to South America? Call Travelvax Australia’s free travel health advisory service on 1300 360 164 for advice on recommended and required vaccinations. You can also make an appointment for a pre-travel medical consultation with a team of medical professionals experienced in travel medicine. 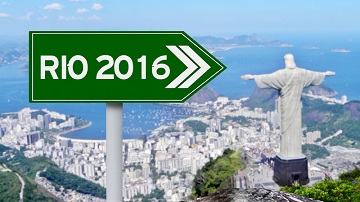