This winter virus can sink your holiday

As the mercury dips each autumn, winter viruses loom large on the horizon.
Not just the more familiar seasonal influenza and colds (rhinoviruses): Winter is also the peak season for norovirus, the most common cause of gastroenteritis worldwide.
Noroviruses thrive in nursing homes, hospitals, large offices, universities, schools… in fact, in any confined, crowded space. Which is why norovirus outbreaks are not uncommon on cruise ships and at holiday resorts.
What make norovirus so contagious that it causes more than 90% of the world’s non-bacterial outbreaks of gastroenteritis? There are a couple of reasons.
Firstly, a single infected person can shed literally billions of norovirus particles. It takes as few as 18 particles to infect another person and they can be infected in a number of ways.
Secondly, just like influenza, noroviruses are constantly mutating. And, like flu, past infection offers no immunity to the new strains that emerge every couple of years.
The global economic burden of norovirus is a staggering $60 billion per year, with an annual estimated death toll of 200,000, according to new estimates drawn from studies of the disease and its impact.

Unlike airborne influenza, noroviruses are usually spread through close personal contact with an infected person. The virus can also be passed on through faecal-oral transmission via food or water contaminated with norovirus particles, or picked up by touching surfaces, objects, or substances particles have landed on.
Many outbreaks are traced to food that was handled by a single infected person. But, more than 4000 people fell ill with norovirus in north-eastern Spain last month after drinking faecal-contaminated bottles of spring water – the first time ever that norovirus has been found in bottled water.
Norovirus symptoms usually begin with sudden vomiting, abdominal cramps, nausea and watery diarrhoea which can last 24-72 hours.
Most people recover without medication and with no long-term complications. Dehydration is the most common complication, especially among the young and the elderly.
As with flu and colds, it’s children, the elderly and people who are immune-suppressed or live with chronic diseases that are likely to get a more severe bout of sickness. Illness can persist for significantly longer in people aged 70 or older, probably due to their diminished immune response.

With ever-bigger vessels and more people than ever travelling, it’s no wonder cruise ships are the ‘perfect breeding grounds’ for infectious diseases like norovirus, according to norovirus expert, Peter Curson, Emeritus Professor of Population and Health at Macquarie University and Honorary Professor of Population and Security at Sydney University.
In the last decade, more than 100 million people took a cruise – 23 million last year alone, including more than a million Australians.
Today’s 200,000-ton vessels are up to 14 decks high and packed with restaurants, bars, lounges, theatres, casinos, shopping arcades, recreational centres, and people – lots of people. These massive ships can carry more than 5000 passengers and 2000 crew.
“They bring together thousands of people from a wide variety of origins and backgrounds and cluster them together in confined spaces where they regularly intermingle and share basic facilities,” Prof Curson wrote in an article published by the ABC online recently.

Why shipboard infections are hard to avoid

When a ship is hit by norovirus, some cruise lines have adopted a strategy of blaming passengers and accusing them of poor personal hygiene and not washing their hands, Prof Curson said.
Indeed, sometimes they are right: few people would forego an expensive cruise because of a bout of diarrhoea.
But, with rapid turnarounds, the culprit could just as easily be inadequate food handling or storage, or an infected member of the kitchen staff who continued to work despite gastro symptoms. Recruited from across the globe, crew members are sometimes reservoirs of disease, but who can blame them for not wanting to forego their wages.
Regardless of size, cruise ships are floating smorgasbords. The biggest ships can serve up as many as 16,000 meals a day.
Passengers can play a key role in transmitting norovirus once it’s introduced. Everyone arrives at the buffet by pushing open the same door, picks up the same jugs of juice or milk, dishes up food with the same utensils, and sits in a just-vacated seat.
And, the potential for infection is not confined to food: literally thousands of passengers might use the ship’s PCs or handle the magazines and books in the lounge during a cruise.

Soap and water the best solution

Norovirus vaccines are in development. But, until one is available, hand hygiene offers the best protection against this and other winter bugs, not to mention those that cause traveller’s diarrhoea.
For something that is so simple, only 1-in-5 people wash their hands properly, according to observational studies.
The gold standard of effective hand washing is soap, warm water and 20 seconds of vigorous rubbing along the full length of the hands and between fingers every time you use the toilet and before every meal.
Hand wipes containing at least 60% alcohol, which are effective against flu and cold germs, are less effective against norovirus particles because of their particular molecular makeup.
However, if soap and water aren’t available, alcohol-based wipes are definitely the next best option.
* Dr Bajrovic is the Medical Director Travelvax Australia. 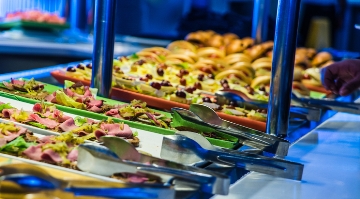