Watching out when bats are about

BAT: Noun /bæt/ Order Chiroptera: the second biggest order within the animal division (class) of Mammalia with over 1,300 species; found in most places except for the two Poles and a few Pacific islands. The largest, the tropical fruit bat, has a wingspan of over 1.5 metres, the bumblebee bat of Thailand and Myanmar is the smallest weighing in at just 2 grams1.

They are, without doubt, fascinating creatures that have across the centuries been associated with evil spirits, darkness and ghosts in some cultures, but in others such as China, they’re considered a symbol for long life and happiness2. These days they are more likely linked to video games or super heroes!

Many of us are familiar with the sight of colonies of flying foxes taking to the skies in the early evening and passing again to return to their roosting places hours later – they are part of our landscape. But it’s the closeness of our urban areas to their habitation and feeding grounds that has led to warnings of the dangers of being bitten or scratched by bats because of the risk of Australian Bat Lyssavirus (ABL) infection3. (In fact, the risk of ABL transmission is quite low – <1 percent of bats are infected4.)

Since  ABL was first identified back in 1996, initial testing identified only a few of our fruit bat species and one that is insectivorous as being able to transmit the viral infection. Now however the consensus seems to be that any of our bat species has the potential to be a host of the rabies virus – fruit bats and insect-eating varieties5.

ABL is closely related to the rabies virus we recognise in terrestrial mammals, most commonly dogs. Rabies virus and ABL are both Lyssaviruses.

On the qui vive

And these warnings do not apply to Australia alone: Before you even think about handling or approaching a bat you should know that the standing advice from the US Centers for Disease Control and Prevention is: ‘Bat bites anywhere in the world are a cause of concern and an indication to consider (rabies) prophylaxis.’ 6 (Of note, bat bites have been the cause of most recent human rabies cases in the USA.7)

While dogs are responsible for most rabies infections in humans across the world, mammals as a whole are capable of transmitting the virus. This occurs through bites mostly, but in rare cases it can also happen if the animal licks its claws and then scratches you, or if its saliva comes into direct contact with your eyes, mouth, nose or an open wound. And so it is with bats.

Tragically, three Australians have lost their lives to ABL – of the 2 with known exposure to bats, one had onset of symptoms after a few weeks, the other after more than 2 years5.

The length of the incubation period is determined by the amount of virus (contained in the saliva) inoculated into the wound, its proximity to the brain i.e. head & neck, and the number of nerve cells in the area. After multiplying in the wound, the virus inevitably reaches nerve tissue. It then travels via the nervous system to the brain, where it continues to multiply with progressively more gruesome and painful clinical symptoms. If rabies pre-exposure vaccines have been administered (3 doses over 3-4 weeks), 2 more doses of vaccine are needed as well as the appropriate first aid (see below). In those cases where there has been no pre-exposure vaccines, first aid and then post-exposure prophylaxis (PEP) must be administered before the virus enters the nervous system, so that death can be prevented.

Rabies and ABL are 100% preventable

While it’s virtually 100% deadly, rabies is 100% preventable. But, a series of steps needs to be taken in the right order to prevent infection.
1 – The wound needs to be cleansed, gently but thoroughly, with lots of soap and water.
2 – If available, alcohol or iodine should be applied. The wound should be covered with gauze to prevent infection (but not bound), or left uncovered.
3 – It is critical to seek expert medical attention as soon as possible. (Don’t wait for confirmation that the animal was infected. That could take days – even weeks.) It’s important to find a medical facility experienced in rabies treatment that stocks (or can obtain quickly) both Human Rabies Immune Globulin (HRIG) and the first doses of rabies cell culture vaccine. Injected at the site of the wound, HRIG contains rabies antibodies that immediately inactivate the rabies virus until the vaccine begins to work. The rabies vaccine is equally effective against ABL and terrestrial rabies and is highly immunogenic. So a correctly and timely administered course of post-exposure prophylaxis should prevent rabies 100% of the time.
4 - Have a tetanus booster, if one is required.
5 - Observe the wound for redness and discharge. Bacterial infection may occur after animal bites and antibiotics may be required.

When it comes to following up on any potentially rabid exposure, do it promptly; however the rule is ‘better late than never”.

Bats have by varying degrees been associated with other infections (i.e. histoplasmosis, leptospirosis, salmonellosis, Nipah & Ebola virus and SARS)6and in some regions their habitats have been damaged or destroyed by the local population out of fear8. But bats play a vital role in our ecosystem and are an important gauge of its health - they pollinate, disperse seeds and control pests9 so they should be valued and admired – from a distance. 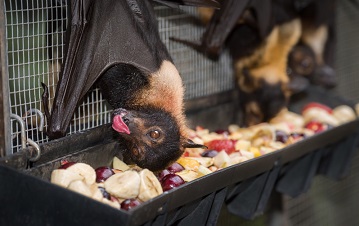