There will still be many, many people who are content to miss the pizzazz of the Carnival in Rio and take in all that Brazil has to offer once the parades are over. Whether it’s the city sights and beaches of Rio, a cruise down the Amazon, wildlife tour of the Pantanal or taking in the magnificent Iguaçu Falls at the triple border of Argentina, Brazil and Paraguay, there’s plenty to enjoy!

At this time, there’s an extra consideration to make sure your trip goes according to plan and it’s very much about protecting your health: An expanding outbreak of yellow fever (YF) is taking place in several Brazilian states. It started back in December in the state of Minas Gerais, and has now spread to Espírito Santo, Bahia, Rio Grande do Norte, São Paulo, Tocantins and Goiás. Yellow fever vaccination has long been indicated for travel to government prescribed ‘Areas with Vaccination Recommendation–ACRV  but with this outbreak, the list of towns and districts has been extended to cover even more municipalities – including the entire state of Espírito Santo  - where the protective vaccine is advised for anyone over 9 months of age* who is not already vaccinated.

We dealt with yellow fever infection, the vaccine (which is given at licensed clinics such as Travelvax in Australia) and International Health Regulations in our article posted on Nov 28th last year, Yellow fever vaccination certificate changes, but we think in this instance it’s worthwhile giving some background on yellow fever in Brazil: The yellow fever virus maintains its presence in the country through infections transmitted by mosquitoes between certain species of monkeys that live in the forests. When humans who are unimmunised (and not actively preventing insect bites) venture into these areas, they are bitten by infected mosquitoes - this is the sylvatic cycle of yellow fever infection. Once the infected humans return to a town, an urban cycle continues the spread as urban-dwelling Aedes aegyptimosquitoes transmit the virus between non-immune people.

Yellow fever is endemic in the Amazon region, but periodic outbreaks occur outside this area when unvaccinated people are exposed to the virus, such as during the 2008-9 epidemics which hit the southern states of Rio Grande do Sul and São Paulo. Many of those infections occurred in parts of the country where vaccination was not recommended at that time and so the ACRV guidelines were revised to include expanded new regions. 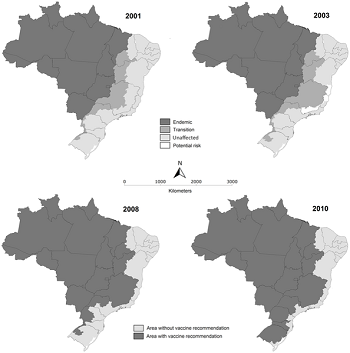 On a national level, the response to the current outbreak  has entailed nearly 15 million YF vaccine doses being sent to the states of Minas Gerais, Espírito Santo, São Paulo, Bahia and Rio de Janeiro. The strategy is to ensure the population living in affected areas is immunised, as well as increasing disease surveillance and controlling the virus’s mosquito vectors. (As the outbreak is not contained as yet, we advise anyone heading to Brazil to speak to their yellow fever licensed doctor for the most up-to-date information.)

Planning a trip to Brazil? Call Travelvax Australia’s free travel health advisory service on 1300 360 164 for advice on recommended and required vaccinations. You can also make an appointment for a pre-travel medical consultation with a team of medical professionals experienced in travel medicine. 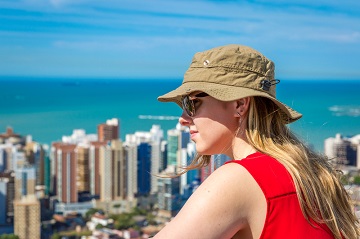