Tick bites that pack a punch

The lush European countryside in summer is renowned for emerald green meadows and the sound of cowbells, but there are many visitors, including Australian tourists, who are oblivious to a tiny, but potentially dangerous, insect that may be lurking in the grass – ticks, and they are capable of transmitting a number of diseases.
This year, popular tourist destinations such as Switzerland and Germany have already experienced a rise in the rates of infections transmitted by ticks, particularly tick-borne encephalitis (or TBE). Switzerland has recorded some 150 TBE cases since the beginning of 2018, while in Germany, when compared to last year, TBE case numbers have also increased and they correlate with the high tick activity observed by researchers in the country’s south (a hot spot for tick activity). More and more travellers from non-infected countries are visiting at-risk areas and undertaking adventurous and off-the-beaten track travel, so there is a very real need for travellers to be aware and prepared for this rare, but high consequence, disease.

Tick-borne encephalitis is caused by a virus that is transmitted to humans by the bite of infected ticks (Ixodes persulcatus and Ixodes ricinus species) or as a result of consuming contaminated unpasteurised milk products. There are three related sub-types: European, Siberian and Far-Eastern and they are all caused by a flavivirus, a genus of viruses that includes dengue fever, Zika virus, yellow fever and Japanese encephalitis, all of which are transmitted to humans and animals by insects such as mosquitoes and ticks. The virus acts by attacking the human central nervous system and it’s the most common tick-borne infection in Europe and Asia, affecting at least 27 European countries and several Asian nations. Within the risk areas there’s considerable variation in both the prevalence of the virus in the tick species, and in the pervasiveness of infected ticks.

The incubation period of tick-borne encephalitis virus (TBEV) infection ranges from two to 28 days, with an average of seven to 14 days; however if the virus is ingested, that drops to around 3 to 4 days. As with other illnesses caused by a flavivirus, only a small number of infections actually lead to symptomatic disease – around three-quarters of TBE infections produce no symptoms. For those that do, there is often a two-part progress: a non-specific illness with fever, muscle aches and headache, followed by the most recognised clinical manifestation, neurological disease such as meningitis, encephalitis and encephalomyelitis.
The severity of the disease depends on the virus sub-type: the Far-eastern sub-type generally follows a one-stage illness with death rates of up to 35 percent, while the European and Siberian sub-types tend to produce a less severe illness, with fatality rates of 0.5–2 and 1-3 percent respectively. However, also associated with the European sub-type is the incidence of age-related complications: adults aged over 40 are more likely to develop severe disease and if they are over 60 years of age, the incidence of death or lasting effects increases again.

Risk of TBE infection in travellers

Just how many travel-associated TBE cases there have been is unknown, and the reporting of infections in tourists is likely to be underestimated, particularly as the illness’ average incubation period is two weeks, meaning clinical symptoms are likely to occur when travellers return home.
The risk of contracting a TBE infection depends on the season of travel (ticks are active during the warmer months of April to November) and the amount of unprotected outdoor exposure (activities planned in forested areas where ticks may live, usually with grass, bushes and shrubbery and up to 1,500 metres in altitude). The activities that constitute the highest risk for travellers are camping, hiking, biking, mushroom- and berry-picking, mountaineering, horse riding (a popular past-time for tourists in Mongolia) and playing golf. The first imported case of TBE in Australia, as reported in a study by Chaudhuri et al (2013), concerned a traveller returning from Russia and it highlighted the difficulty in making a definitive diagnosis because of its rarity and the unavailability of laboratory testing.

Bite avoidance measures
The advice is to avoid tick-infested areas and protect yourself against tick bites by dressing appropriately (long sleeves and long trousers tucked into socks) and use an effective insect repellent. Repellents containing DEET, Citriodiol or picaridin can be applied directly on exposed skin, while clothing and camping gear can be impregnated with a contact insecticide such as permethrin. Following outdoor activities, clothes, hair and skin should be routinely examined for ticks and if found, they should be removed promptly. Additionally, consumption of unpasteurised milk products should be avoided.

Vaccination
Besides preventing tick bites, immunisation is the best way to protect against TBE. In Australia, a vaccine (Ticovac) is available through the Therapeutic Goods Administration’s Special Access Scheme but we advise you to contact your travel health practitioner well in advance of travel as more than one dose is needed to offer protection. 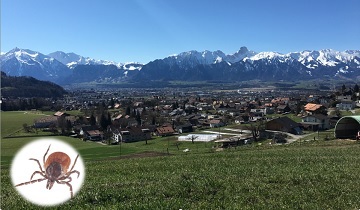