Must have been something I ate …

Both food poisoning and stomach flu can give rise to nausea, vomiting, cramps and diarrhoea - but the two conditions are in fact of different aetiology. Consuming food that has been contaminated with viruses, bacteria or parasites at some point during production causes food poisoning, whereas stomach flu is a viral infection of the digestive system. Stomach flu is most commonly brought on by norovirus or rotavirus, and is different from the conventional flu, which attacks the respiratory system. Both food poisoning and stomach flu cause a condition known as gastroenteritis –inflammation of the gut, which may involve the stomach, the small and/or large intestine.

According to the World Health Organization (WHO) report on the estimates of the global burden of foodborne diseases in 2010, there were approximately 600 million foodborne illnesses causing 420,000 deaths.

The three groups of infectious agents that cause gastroenteritis are viruses, bacteria and parasites. Among the viruses, rotavirus (more common in children) and norovirus (more common in adults) predominate. The most common bacteria involved in food poisoning are Salmonella, Campylobacter, Shigella, Escherichia coli and Clostridium difficile.
Some of the more common parasites that can cause gastroenteritis are Cryptosporidium, Giardia and intestinal worms.
Norovirus is a leading cause of viral gastroenteritis across the world: according to the US Centers for Disease Control and Prevention (CDC), each year there are 685 million cases while Australia reports between 1.4 and 2.3 million cases annually.

What to look out for

The symptoms of food poisoning generally appear abruptly, often within hours of ingestion of contaminated food, but can be much longer depending on the cause of the infection - and can be quite severe. Vomiting associated with food poisoning generally lasts for about a day, while diarrhoea may persist for two or three days. Stomach virus symptoms can take 2 to 3 days to develop and will normally settle within another 1 to 3 days.

Diagnosing food poisoning can be difficult, especially if the source of the illness cannot be identified. A doctor may be able to do stool tests if indicated by sending a stool sample to pathology laboratory to determine the type of bacteria, virus or parasite that may be causing the symptoms. In the case of norovirus and rotavirus, a rapid stool test is available.

What is the treatment?

In most instances the symptoms of stomach virus and food poisoning will resolve without any medical intervention.

• Oral rehydration is the key to recovering from mild to moderate dehydration, especially for infants and young children, as well as adults with chronic illnesses. It’s important to restore lost body fluids and replenish depleted electrolytes, such as sodium and potassium. Replacing both fluid and electrolytes will make the sick person feel better quicker.

• There are excellent over-the-counter oral rehydration solutions (ORS), such as Gastrolyte & Hydralyte, which can be purchased in a variety of formats such as in powder or tablet form. These just need to be dissolved in the correct quantity (usually a litre per dose/serve) of bottled, boiled or treated water. If ORS is not immediately available, rehydrate with safe water or whatever other safe liquid is available.

A word of warning: Sports drinks are designed to replace the fluids lost through sweating during exercise. They are not recommended for treating stomach viruses or food poisoning –they do not contain the appropriate balance of electrolytes to facilitate recovery from loss of body fluid from the gut.

What can I eat?

• Start with small, light meals and gradually build back up to a normal, unrestricted diet.
• Eat bland, easy to digest food such as cereal, rice, toast and bananas.
• Until your stomach completely settles down, avoid dairy products, sugary or fatty foods, and caffeine and alcohol (they can aggravate the effects of dehydration).

Over the counter medications are available to ameliorate diarrhoea. However, these should be used with caution, particularly if the cause of the infection is certain types of bacteria that produce severe symptoms. If there were blood in the stool or vomitus, inability to maintain hydration for more than a few hours, and/or persistent fever, a medical consultation is essential.

Washing your hands is one of the most important ways of preventing illness, wherever you are – especially after using the toilet and before eating.

It’s important to do it properly:
- First, wet your hands with clean, running water (warm or cold), turn off the tap, and apply soap.
- Work up a generous lather by rubbing your hands together for at least 20 seconds (not forgetting the backs, between fingers, and under nails).
- Rinse them under clean, running water.
- Dry them using a clean cloth or paper towel, or air drier.

While soap and water remain the gold standard method, an alcohol-based sanitiser will otherwise eliminate MOST germs, but is not as effective when hands are visibly dirty or greasy.
- Apply the sanitiser to the palm of one hand (the correct amount will be on the label).
- Rub the top and bottom of each hand in turn.
- Continue rubbing over all surfaces until your hands are dry.
Studies have shown that a sanitiser with an alcohol concentration between 60–95% kills more germs that those with lower concentrations or no alcohol at all.
Non-alcohol based sanitisers are far less effective when it comes to killing certain germs such as Cryptosporidium and norovirus. They are also more likely to irritate your skin than alcohol-based ones, according to the CDC.
Hand hygiene is important in any setting, but particularly when you are travelling in a developing country.

The Food Safety Information Council has put together these 4 principles which can help to prevent food poisoning: 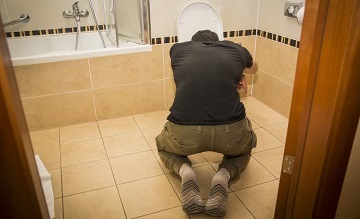