On the menu today… You!

Right now it’s the rainy season in many regions of Asia popular for travellers, such as India, Thailand, Vietnam, Cambodia and Laos.You may not want to hear this if you’re heading over there for a holiday soon but … when the rainfall increases, so do the activities of biting mosquitoes.

Mozzies. They’re not just pesky insects; they cause diseases that sicken or kill millions of people worldwide each year. We know that it’s the female mosquito that bites us, requiring a blood meal to incubate her eggs. And of the species that prefer meals from vertebrates (including humans), some bite at night (dusk to dawn) while others feed during the day (dawn till dusk).

The insects are drawn to us by the carbon dioxide we exhale and our body heat, but how they decide which individual to zoom in on is dependent on the preference of the particular mosquito species. It can be genetics, a colour tone (dark), or an odour, for instance, from beer drinkers, lactic acid found insweat, pregnant women, some skin bacteria or feet that are ‘on the nose’. Interestingly, one study found that Anopheles (malaria-transmitting) mosquitoes were more likely to be drawn towards humans who had malaria. This would of course enhance the risk of onward transmission of the malaria parasite to the next person the mosquito feeds from.

If you’re travelling to Asia at this time of year it’s wise to get the right advice by speaking to a travel health practitioner. That way you can learn about any potential risks for your itinerary, in particular mosquito-borne infections which are likely to be more prevalent due to the ideal breeding conditions presented by the rainfall. The doctor will take you through the best ways to prevent infection, which includes when the disease vectors (mozzies) are active:malaria- and Japanese encephalitis virus-transmitting mosquitoes fall into the night-time biting category, while those that transmit dengue fever, chikungunya and Zika virus are more active in daylight or if the area is brightly lit.

They’re not very common fortunately, but we do hear tales of dengue fever or malaria infections in Australian travellers returning home. (So far this year over 350 people have contracted dengue and 147 malaria.) Of course mosquito-borne illnesses can also be caught here without leaving the country. Last year was a particularly bad one for Ross River virus infections, with nearly 7,000 cases – over 5,000 of those from Qld, Victoria and NSW. We also have Barmah Forest virus, Murray Valley encephalitis and Kunjin virus, among others. The chain of infection is mostly between animal or bird reservoirs and mosquitoes but if they’re unlucky, and unprotected by clothing and repellents, humans can become sick when bitten by an infected mosquito.

Keep your guard up and avoid bites

It takes just one bite from an infected mosquito for you to get sick. And, it’s especially easy to let your guard down when you’re on holidays.
Until effective vaccines are available, we have to rely on avoiding mozzie bites by:
- Using an effective insect repellent containing DEET, Picaridin, or Citriodiol (PMD).
- Getting rid of water-holding containers around your accommodation where mozzies can breed, and
- Either going inside around dawn and dusk or changing into long sleeves, long pants, and shoes and socks (the clothing can be treated with a contact insecticide, permethrin).
- Sleeping under a permethrin-treated bed net if your room is not screened or air-conditioned.

Don’t become another travel statistic.
Before you fly, call Travelvax Australia’s travel health advisory service on 1300 360 164 (toll-free from landlines) to learn more about the mosquito-borne diseases at your destination. You can also arrange a consultation to get recommended vaccinations and personalised illness prevention advice from medical professionals with an interest in travel medicine. 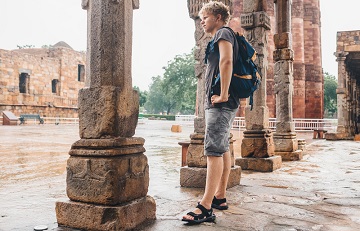