“May I see your yellow fever certificate…?”

For a mosquito-borne disease that usually flies under the radar, yellow fever (YF) is very big news right now.
So, if you’re planning to visit any of the yellow fever-infected countries of Africa or South America soon – say, for the Olympic Games in Brazil in August – or if either continent is on your travel ‘Bucket List’, there are a couple of things you should know.
Firstly, yellow fever is in the spotlight mainly because of an escalating epidemic in Angola and neighbouring countries in Africa. It threatens to spread to Asia and other parts of the world that have been, until now, free of the disease.
Secondly, the international regulations concerning mandatory vaccination for people visiting yellow fever countries are about to change for Australian travellers.

Yellow fever infection can be fatal

Like the dengue, chikungunya and Zika viruses, yellow fever is primarily spread by Aedes aegypti mosquitoes, but Aedes albopictus and Haemagogus species can also pass on the virus when females bite to obtain the blood they need to lay eggs.
Yellow fever gets its name from tell-tale jaundice of the skin and the whites of the eyes. Symptoms include sudden fever, chills, severe headache, back pain, body aches, nausea and vomiting, fatigue, and general weakness.
Illness can range from mild for most people to severe for around 1-in-10, who may experience liver and renal disease with bleeding. While most of this unlucky 10% eventually recover, around 15% of them will have a brief period without symptoms before developing severe, usually fatal symptoms.
Over the past two decades, the number of yellow fever cases worldwide has increased due to declining immunity to infection, deforestation, urbanisation, population movements, and climate change.
Most of the estimated 200,000 yellow fever cases and 30,000 deaths worldwide annually occur in sub-Saharan Africa.

Out of Africa… and into Asia

The current yellow fever outbreak in Central Africa is the biggest in decades. To date Angola has recorded 2000 suspected cases, including 258 deaths since the outbreak began four months ago.
The acute haemorrhagic disease has spread to the Democratic Republic of Congo, and Uganda. The World Health Organization is concerned that with the vaccine already in short supply, porous borders could result in large-scale outbreaks in neighbouring nations, such as Kenya, Namibia and Zambia.
So far, there have not been any outbreaks outside Africa, although 11 cases have been imported into China by expats who fell ill while working in Angola. Fortunately, China’s current climate doesn’t favour mosquito breeding, so for now at least, the risk of local transmission there is low.
But, the ease with which yellow fever can be transported through rapid jet travel confirms the very real potential for the virus to become established in many Asian countries – most notably the world’s second most populous nation, India, where the two Aedes species are firmly and widely entrenched. (Indeed, Aedes albopictus is known as the ‘Asian Tiger’ for its distinctively striped body.)

With Games, Americas are fertile ground

There is also concern the virus could find fertile ground in South America, the other region where yellow fever occurs. Brazil will welcome thousands of African Games competitors and spectators in just over three months.
South America has far fewer yellow fever cases and deaths compared with Africa, with most occurring in communities living in or near the forests of the Amazon Basin. Just this week, the WHO confirmed an outbreak in Peru involving 25 cases – more than the nation's combined total for 2014 and 2015.
However, the potential for larger outbreaks is all too clear: Massive, ongoing epidemics of first dengue, then chikungunya and more recently, Zika in the Americas and Caribbean, as well as in the Pacific, are proof yellow fever could also sweep across the region – and to anywhere else Aedes mosquitoes call home.
Writing in The Lancet recently, a group of international experts were particularly concerned at the high case-fatality rates for yellow fever in comparison with dengue, chikungunya and Zika and the potential for the disease to spread to new areas through international travel and trade. That includes North Queensland, where dengue outbreaks occur every summer and chikungunya and Zika are most likely to slip into Australia.

Yellow Fever is the only disease for which vaccination is mandatory under the International Health Regulations (IHR) for travel visiting endemic countries, provided there is no medical contraindication. The regulations were adopted by 194 countries adopted in 2007 to prevent the further spread of the virus.
Historically, yellow fever infection has been rare among Australians who’ve returned from Africa or South America.
Most are vaccinated and the vaccine is one is among the most effective ever developed: 81% of people are still immune 30 years after receiving it, studies show.
And, because stays are usually short and rural travel is usually brief, travellers are far more likely to encounter dengue, chikungunya, or Zika in urban areas – or possibly malaria, if they venture into an area where Anopheles mosquitoes are infected with the parasite.
In a 2014 review of almost 80 years of yellow fever data involving 600 million yellow fever vaccinations, the World Health Organization’s Strategic Advisory Group of Experts on immunisation uncovered only 12 documented cases of ‘vaccine failure’– instances where a vaccinated person became infected after exposure to the virus .
Those findings were compelling enough to change the regulations.

Change comes into effect this June

From this June, the rule change will come into force in Australia for all travellers over 9 months of age planning to visit any of the yellow fever-endemic countries of Africa and the Americas.
The change will mean:
- If your current YF vaccination certificate is still valid (less than 10 years old) when the change takes effect, you will no longer need to get a booster every decade. (There may be some yet-to-be-announced exemptions, such as for travellers with chronic underlying diseases, for whom repeat vaccination after 10 years may still be recommended.)
- Anyone who gets the vaccine for the first time will never need a booster.
Travellers (over 9 months of age) who aren’t medically exempt from vaccination will still be required to prove that they’ve had the vaccine by producing their ‘yellow book’ containing the internationally recognised certificate, stamped and signed by a licensed vaccination clinic.

Yellow fever is firmly on the radar

There was a time when the health officers at airports in yellow fever countries and when you returned home were almost blasé about vaccination.
If they checked the certificate in your official yellow vaccination record book it was a perfunctory glance, although the regulations have always allowed for anyone suspected of being infected with the virus to be quarantined.
With the relentless rise of mosquito-borne diseases, that’s no longer the case.
Like Zika, yellow fever looks set to stay firmly on the radar at airports around the world this year.
If you are travelling to Brazil for the Games or to a tropical region, preventing mosquito bites may be the single most important thing you can do to protect your health while you’re away.

* Dr Bajrovic is the Medical Director of Travelvax Australia.

Contact Travelvax Australia’s travel health advisory service (1300 360 164) for country-specific information and advice, including possible immunisations, for your next overseas travel. You can also make an appointment to have your vaccinations completed in a consultation with a team of medical professionals experienced in travel medicine. 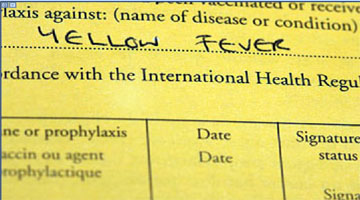