Take condoms with you, and use them. That’s the message to young Aussie backpackers following a study showing high rates of unsafe sex with new partners among young international travellers heading to full moon parties in Thailand.
British researchers say high-risk sex among young travellers attending the hugely popular all-night beach parties on Koh Tao and Koh Phangan is fuelling the global spread of sexually transmitted infections (STIs) such as chlamydia, HIV and gonorrhoea (including antibiotic-resistant strains like Neisseria gonorrhoea) along with unplanned pregnancies.

What the study found

In a survey of 1238 young single travellers - including 72 Australians – visiting Thailand, the researchers found that overall almost 40% had sex with a new partner. Of these, 37% had unprotected sex.
The survey also revealed:
- UK and Swedish backpackers were most likely to have unprotected sex, at rates of 49% and 46% respectively.
- Australians had a 30% rate of unprotected sex.
- Most likely to practice safe sex were Canadian and German backpackers, with up to 80% consistently using condoms.
- Backpackers were more likely to have sex with travellers from other countries, while males are also likely to use local sex workers.

In 2013, a 14-year study of STI patterns and rates among 112,180 international travellers found that the type of infections varied among different classes of travellers.
Those most likely to be diagnosed with an STI were:
- Male travellers
- Younger adults
- Businesspeople
- VFRs (Visiting Friends and Relatives abroad)
- Short-stay travellers (less than 30 days)
- Immigrants
- Travellers who had not sought pre-travel medical advice
The most common travel-related STIs where non-gonococcal or other unspecified urethritis, acute HIV infection, and syphilis. For men, urethritis and epididymitis were most common, while cervicitis topped the list of STIs for women.

Condoms have some limitations

Condoms are as important as sunscreen, personal insect repellent, and sanitising hand gel.
While condoms are widely available overseas, their quality can vary. Our advice is:
- Take your own from Australia: You can be sure of their quality.
- If you purchase them overseas, first check the expiry date and make sure the pack carries a recognised quality assurance mark.
- Use only water-based lubricants with latex condoms.
It’s important to remember that condoms have limitations.
Condoms WILL protect against: HIV, Hepatitis B and C, gonorrhoea, chlamydia, and syphilis.
Condoms WILL NOT prevent: Genital herpes, genital warts, pubic lice, or scabies.
Read more about male and female condoms and how to use them correctly.

Safe sex is smart – at any age

Enjoying sun, sea and sex on holiday is not just for 20-somethings: a separate British study published in the journal, Sexually Transmitted Infections found that older holiday-makers – one-in-20 men and one-in-40 women aged 35 to 74 – had a sexual relationship with a new partner while travelling abroad.
Researchers found that those travellers who found a new sexual partners abroad were also more likely to engage in risky behaviour, such as unprotected sex. They concluded: “These proportions are likely to increase as older people maintain good health, have the financial means to travel, and are now more likely to experience partnership breakdown.”
Regardless of age, if you’ve had unprotected sex while abroad, have a sexual health check-up – including a screening for STIs – through your GP, a sexual health clinic, or a Travelvax Australia clinic as soon as possible after you return.
A thorough check-up provides reassurance and ensures there is no delay in treatment if you returned home with an STI. Just as importantly, by getting diagnosed and treated early you could help prevent the spread of antibiotic resistant infections in your community. 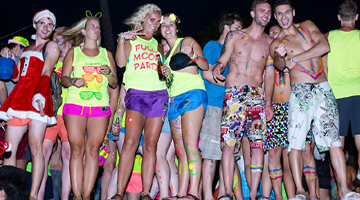