A focus on gastroenteritis

The inflammation of the stomach and intestines, known as gastroenteritis, is typically caused by a virus, bacterium or a parasite. What we know as food poisoning is a common cause of gastroenteritis when the ingested bacteria, viruses or their toxins – known as pathogens - have contaminated food in high enough numbers to establish an infective dose.

Some toxins are found naturally in foods, but in many cases we become infected through direct faecal/oral contamination (person-to-person, possibly from an asymptomatic contact) or from the environment (from animals or via contaminated surfaces), but the symptoms are the same even if food isn’t involved. Food poisoning may also result from ingestion of food containing chemicals, heavy metals, parasites or fungi.

Parasitic infections causing gastroenteritis are commonly contracted through contaminated water, infected soil or person to person from lapses in sanitation and hygiene. The severity of the infection can be directly influenced by a weakened immune system, a person’s age (more likely in the frail, very young or elderly), during pregnancy or when taking medications such as those that reduce stomach acidity (PPIs).

Giardiasis and Cryptosporidiosis are parasitic infections of the intestine contracted through person-to-person contact in settings such as households and child care centres. These microscopic organisms can be found in the faeces of infected humans and animals and are spread when hands are not washed after going to the toilet or changing nappies, on drinking or swimming in contaminated water, handling infected animals or eating food contaminated by an infected person.

Symptoms of infection with Giardia parasites can appear between 3-25 days and typically include diarrhoea, stomach cramps, bloating, nausea, loose and pale greasy stools, fatigue, and if symptoms continue, weight loss. Some infected people have no symptoms, however they can still pass the parasite to others. The infection can last for months if left untreated.

The most common symptom of Cryptosporidium infection is watery diarrhoea. Symptoms appear between 1-12 days (usually 7 days) of infection and may come and go, lasting days to weeks. People with a weak immune system may have more severe symptoms that can last for months. A person is most infectious when they have diarrhoea, but infection is still possible for several days after symptoms disappear, while the parasite is still being excreted.

Our strict national food safety standards are legislated by the federal government and they encompass food handling, health and hygiene requirements for food handlers, conditions for food businesses and cleaning, sanitising and maintenance. Even so, it has been estimated that more than 4 million Australians suffer from a bout of food poisoning every year. And the source? Could have been from a home-cooked meal or when dining out. (If you suspect you have food poisoning, in particular from a food outlet, it is important you report your illness to your local council or the Department of Health, so that the cause can be investigated).

The majority of Australia’s food poisoning cases stem from bacterial causes and we all need to be aware of the temperature range, the danger zone for our food, where most bacteria will grow - between 5°C and 60°C.

•    Norovirus – aka gastric or stomach flu, winter vomiting or viral gastro, it is a highly contagious gastroenteritis-causing virus which is spread on contact from an infected person via food, surfaces and objects or person-to-person contact, including via aerosols. A single infected person can shed literally billions of norovirus particles and it takes as few as 18 particles to infect another person. Winter is the peak season for norovirus, the most common cause of gastroenteritis worldwide. Infection generally resolves within 24-48 hours without treatment, but dehydration is a common complication, especially among the young, people with chronic diseases and the elderly, and they are likely to get a more severe bout of sickness. Illness can persist for significantly longer in people aged 70 or older, probably due to their diminished immune response. Good hygiene practices are important to prevent the spread of norovirus – washing with soap and warm water for a full 20 seconds is the best preventive measure, and stay home if you are sick. Norovirus is particularly likely to spread through areas of shared food – among families, childcare centres, schools, aged care facilities and cruise ships.

•    Rotavirus – Recognised as the most common cause of severe and life-threatening diarrhoea in children in Australia because it can lead to dehydration, shock and sometimes death. It is a highly contagious disease that is transmitted person-to-person through contact with someone infected with the virus or via contaminated food, surfaces and objects. Rotavirus vaccination: Before the rotavirus vaccine was introduced in Australia in 2007, each year around 10,000 children under 5 were hospitalised and at least 1 child died. Since the vaccine’s inclusion in our routine childhood immunisation program, hospitalisation rates dropped by more than 70%. The timing of administration of oral rotavirus vaccine courses depend on the brand: either 2 or 3 doses which are given by 24 weeks of age. Serious reactions to the rotavirus vaccine are rare.

•    Hepatitis A – In recent years, hepatitis A infection rates among the wider Australian population have been low, with only sporadic notifications usually caused by common food-borne sources or in overseas travellers returning from countries or regions of high or intermediate endemicity. A marked exception was among Aboriginal and Torres Strait Islanders who had 4-fold higher incidence of Hep A. Hepatitis A vaccination was made available to Aboriginal and Torres Strait Islander children aged 12-24mo in areas of QLD, South Australia, Western Australia and the NT in 1999 and its introduction, along with ensuring a supply of clean water, sewerage and improved hygiene, has led to a decline in Hep A notifications which are now closer to rates in the non-Indigenous community. The virus is transmitted through contaminated food or water, or direct contact with an infectious person (including through some forms of sexual contact). For information of hepatitis A in travellers, go to: https://www.travelvax.com.au/holiday-traveller/vaccinations/hepatitis-a

Food poisoning-causing bacteria can multiply rapidly if conditions are ideal. These include:

It is important to use food safety guidelines when preparing, storing and serving food.

The symptoms of food poisoning will vary depending on the type of organism causing the illness and their onset may be almost immediately after ingesting the food, or begin a few hours later, lasting from 24 hours to up to 5 days.

One or more of these common symptoms may be experienced:

Most people don’t need to see a doctor for food poisoning unless they fall into the higher risk groups when serious symptoms and outcomes are more likely to occur, such as miscarriage, meningitis, kidney failure and death. These groups include:

Dehydration is a serious effect related to food poisoning and fluid must be replaced to aid in recovery. Sucking ice and/or frequent sips of water is important along with the use of oral rehydration salts, such as those available commercially. If not, adding six teaspoons of sugar and one teaspoon of salt to one litre of water is an alternative. Avoid any medicine that prevents vomiting or diarrhoea, unless advised by a doctor. Some common, over-the-counter diarrhoeal medications cannot be used in children, so seek advice from your doctor or pharmacist.

Full recovery for most people is within 2-5 days and antibiotics, while generally not required, may be prescribed for people in the higher risk groups.

When to seek medical advice:

Under the ‘Travellers’ diarrhoea’ tab on the Travelvax website we have covered a number of other causes of food poisoning which are more common in developing countries. 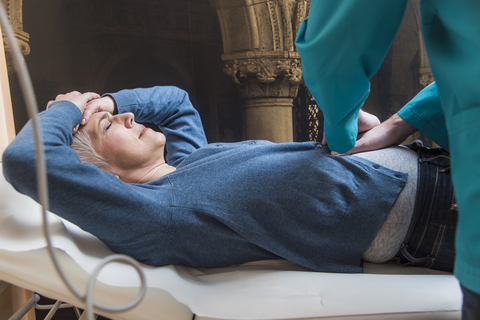